The large school community in Bhandar Dhik has 900 students, from class 0 to class 12. The location is situated in the plain area, close to the city of Pokhara. Because it is centrally located, the Nepali government has appointed this school to educate a selection of blind and visually impaired children, whom are living in the remote mountain areas.

The school area includes one special classroom, where blind and visually impaired children learn to read and write in Braille. After the first year of learning, they can follow the primary classes from year 2 up to year 5.

Due to their handicap, these students can only go home during the longer holiday breaks. Until 2008 they were staying at the house of the headmaster, but the conditions were unsuitable for this specific group. After a merger with another blind institution, the accommodation was also not sufficient for such a large group. Smart Shelter Foundation agreed to design and build a hostel for 20 blind students, with the possiblity of expanding to 30.

The design includes all kinds of specifics for the blind and visually impaired, as well as socially and culturally dictated measures. We carefully paid attention to spatial planning, routing, easy ways of exit during a seismic event, and acoustics. We also included colour schemes for those who can still see some differences between light and contrast. We did not remove any steps or stairs, as the students will need to stay alert to such obstacles outside the building. and in all-day life.

As with all our buildings in Nepal, the hostel has to be earthquake resistant. This is a multi-storey building, so we followed the rules of ‘confined masonry’, a special masonry technique that has proven to behave well in earthquakes. It is stronger, easier to build ánd cheaper than the usual practice of RCC frames! Learn more about this technique here, which we recommend in all earthquake zones.

We had many hold-ups during the building process, caused by political influences, lack of materials and powercuts, but in the end we made it and we were able to stay within the budget. Construction was started in December 2008 and finished in March 2011. The building was officialy inaugurated in February 2012.

After completion of the hostel, the Nepali Government came forward by supporting these students not only for five years, but for Secondary school as well. Meaning that they now can go to school upto grade 10!

Our Partners and Sponsors for this project

This project is executed with the help of SEED Foundation from Nepal, who took care of the complete administration and communication with the villages, as wel as all training and supervision tasks on-site. The project is co-funded by the local community of Leknath Municipality in Nepal (where the hostel is located), and the Dutch funding organization Impulsis. For an overview of all main contributors, see the picture below. 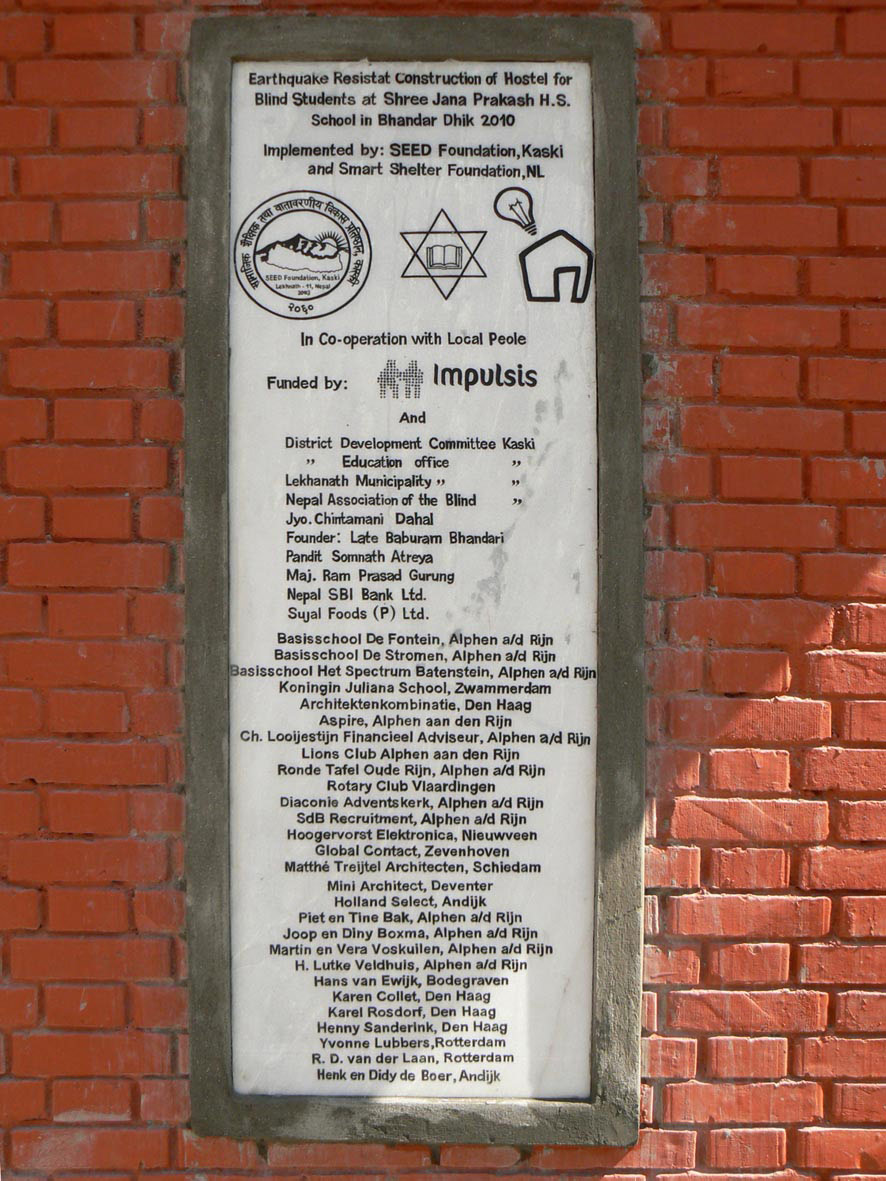